Was There A Natural Phenomenon Present On 9/11 That Fully Explains Hurricane Erin's Movements on 9/11?

I believe that there is a far more serious omission of information regarding Dr Wood's claim that Erin was artificially controlled on 9/11.

As I said in my introduction, Dr Woods' claims about Erin originally interested me because I live on the SE coast of the US where hurricanes hit or pass by fairly frequently, and have lived here for 20+ years, and so have a fair amount of experience with and interest in the need to track hurricanes accurately.

I was fairly sure [from memory] of one very important [for hurricane trackers] natural occurrence influencing the weather on the East coast that day , and was interested to see whether or not Dr Wood had considered it/ included it or accounted for it in her research. To date, it seems she has completely ignored it, out of ignorance of the natural phenomena itself, or with deliberate intent.

That is, a large mass of very cold [arctic], dry air [i.e. a high pressure system] moving in the opposite direction to the hurricane[ i.e. West to East].

In the US in the fall, these large masses of high pressure, cold dry air typically originate over the North Pole and Western Canada, and then spill down East of the Rocky mountains and usually move West to East across the US, often traversing the entire continent in a few days as they typically reach further and further South while traveling Eastward.

This pattern of cold air movement is a regular part of the annual fall weather scenario for the continental US.

You can review the regularity of this September through October weather pattern for yourself for any year 2001- through '13 here.

These very large masses of cold air are also common in the spring as well. Here, for example, is a recent [April 1st, 2013- as I revise this article], weather chart of  a very large West to East moving U.S. cold front [n.b. no hurricane present at this time] : 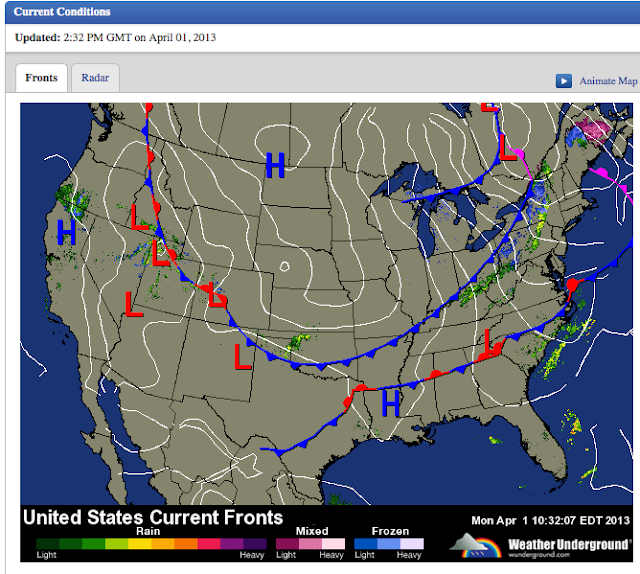 Fig. 1 A screen shot from the National Weather archives showing an April 1st 2013 cold front that has been traveling from West to East across the U.S.

The plain truth is  that any fairly intelligent , experienced weather watcher [e.g. coastal inhabitants of SE US and the gulf regions], knows just through prior personal experience that a large, steadily moving mass of high pressure, cooler dry air traveling West to East in the US will start to influence the  speed and direction of any hurricane approaching the Eastern US seaboard from the East [i.e. traveling approximately East to West towards the East coast of the US] sooner or later - and in fact , that the hurricane will always be deflected away from the cold front as long as it [the cold dry air] continues to advance Eastward.

As a matter of fact, yes. And there was even another one that immediately preceded it: 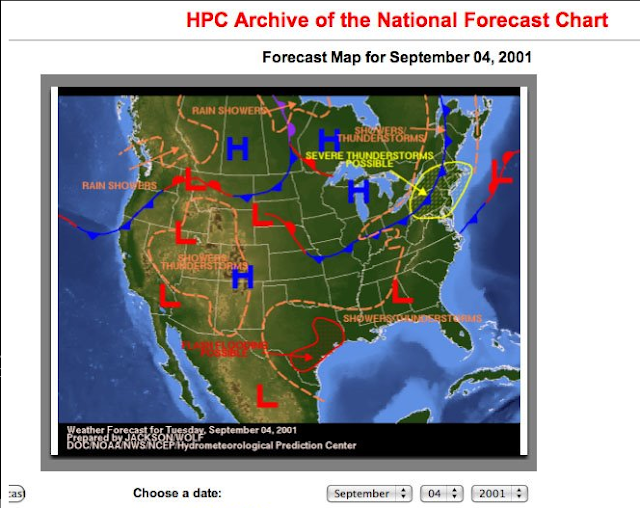 If you take a look at the national weather archives starting 09/04/01 above, you will see a large mass of cold air starting to form in Western Canada. This is the mass we will be following [ direction, development ] over the next few days, through am 09/11/01. Also notice 2 other high pressure areas and cold fronts to the East of the most westerly one we will be mostly watching. 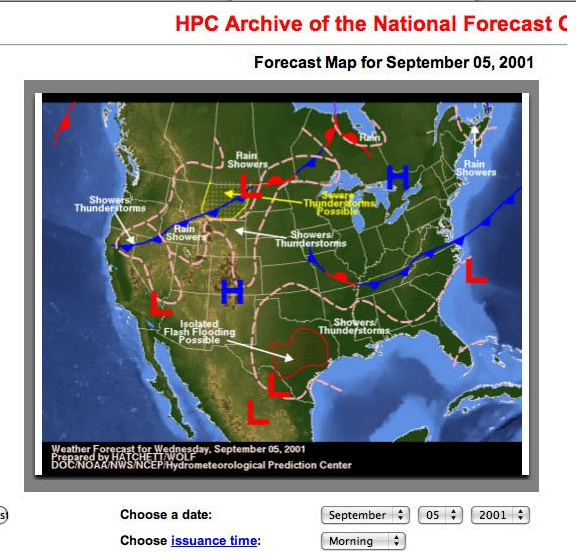 Now take a look at the map for the next day 09/05/01 above, and you see that the most Westerly cold air mass over Canada has straightened out a little and now runs at an approximate 20 degree angle upwards across Canada. Meanwhile, another large mass of cold air is pushing South down the East coast. [but its the most Westerly cold front you need to watch!]. 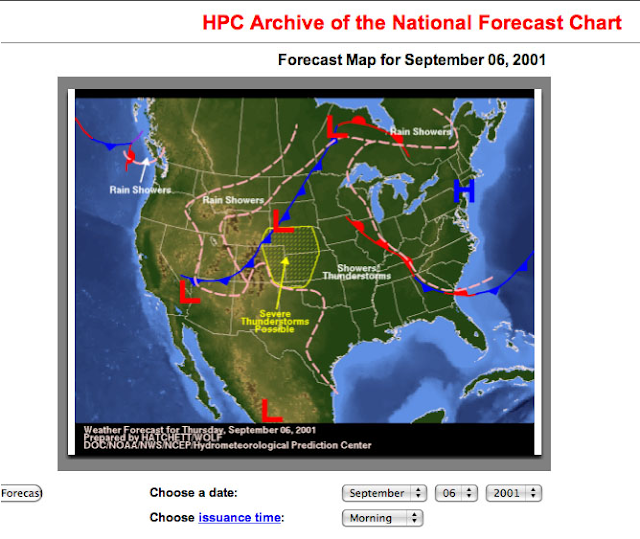 Next, above is the archive map for 09/06/01. You can see that the cold front that started high up and to the West has now spilled down East of the rockies into the US and has started to move Eastward, pushing a large mass of moist, warm air [outlined in yellow] ahead of it. Meanwhile the other mass of cold air already over the East coast has pushed down and offshore. [This other front would probably have already been influencing Erin's speed and direction to some degree.] 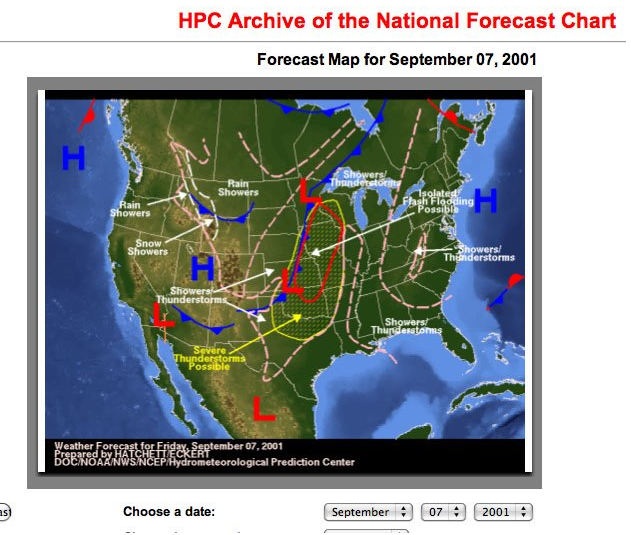 Above is the archive for 09/07/01. Here we see the huge mass of cold air has extended both Eastwards and further South, and that the warmer moist air [low pressure,large yellow outline + smaller red outline for severe thunderstorms] being pushed ahead of it is has increased in size as well .
N.B. Archives For the Next Two Days [09/08/01 and 09/09/01] Are Missing From Source Site.

Unfortunately the archives for the next 2 days [8th and 9th] are missing from the archives and so we must now skip ahead to the archive for 09/10/01.
[you can check availability for yourself at: http://www.hpc.ncep.noaa.gov/noaa/noaa_archive.php ] 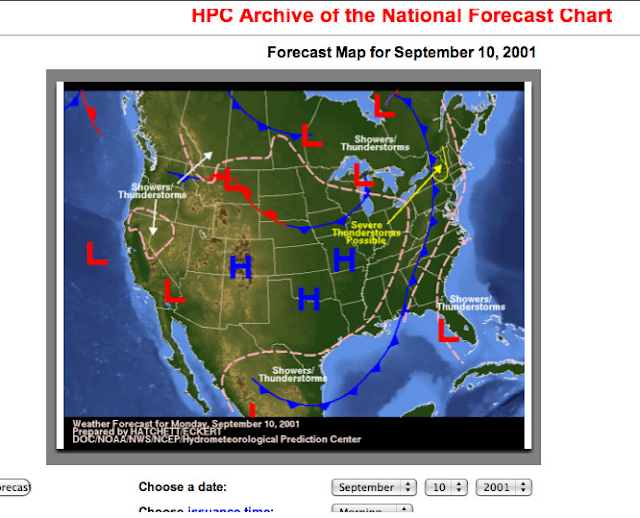 This one [above] dramatically shows how far, and how fast this HUGE air mass had traveled over the previous two days, and how deep [i.e how far South], it had penetrated by the 10th . As you can see, on the morning of 09/10/01[i.e.about 24 hours prior to the events of 911] it extended all the way up the Eastern seaboard into Canada , and all the way down into the Gulf of Mexico and beyond, and that it at this point covered most of the US , East to West.

Two Important Questions For You

At this point , I have 2 questions for you :

Q. [1]:  Based on prior performance as seen in the illustrations above, approximately where do you think this huge mass of cold dry, high pressure air was going to be the very next day, on the morning of 911? Please consider both its prior observed speed, and prior direction.

Q.[2] : What do you think such a vast mass of cold dry air will do to a hurricane trying to move in almost the exact opposite direction, when "push comes to shove" given how it [i.e the huge cold front] is already seen to be treating the warm, moist air just in front of it?.

As I said before, any reasonably intelligent hurricane watcher knows for a fact that given a continuation of the cold air mass' direction , that in this scenario it is hurricane Erin that would have to give way, as other hurricanes preceding it always have done under similar circumstances, and as other hurricanes in the future always will. It is inevitable.

And , don't forget that Erin more than likely had already been somewhat influenced [i.e. slowed, changed direction] by the cold air mass that immediately preceded the even larger cold air mass that followed,and which we have mostly concentrated on here.[Nature's equivalent of a left jab followed by a knockout, right cross?] 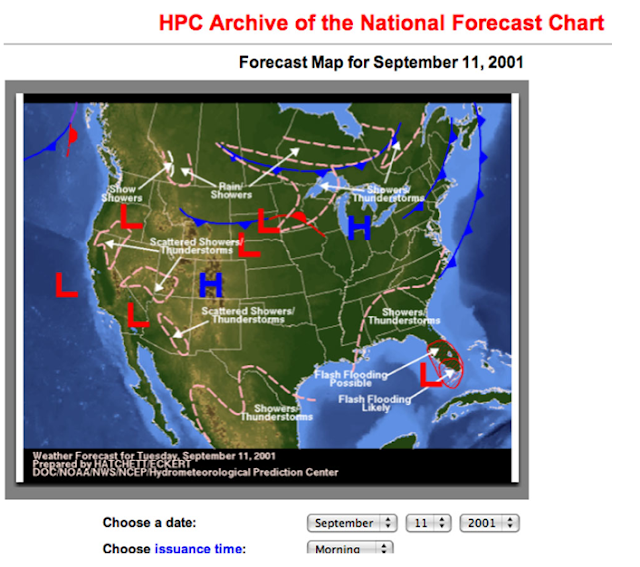 So here we are on the morning of 911. notice that the cold air mass has now moved entirely offshore from North Carolina on up. {My only problem with this archive is that it does not show the blue line extending southwards into South Carolina and Georgia [where I live] when I know for a fact that we experienced exactly the same conditions, that morning as the majority of the East coast i.e. cold dry air, crystal clear blue skies].

My Conclusion: Erin's Directional Change Was an Entirely  Natural Occurrence -Not an Artificially Controlled Event

It seems logical to me that Erin's directional change is very easy to explain - it was changed via a very powerful natural phenomena, that is, an extremely large mass of cold dry air steadily moving from West to East, and not by any mysterious, artificial means that were somehow directly related to the deliberate demolition of WTC 1 and 2, as Dr Wood has claimed.

For myself, and others who watch hurricanes closely merely because of survival instincts, there is absolutely no mystery about Erin's change in direction from predominantly NNE to NNW during the early morning [around 2am] of 09/11/01; any intelligent east coast inhabitant, and more importantly, any weather professional or even a lowly weather bureaucrat could reasonably conclude well ahead of time, and with almost no shadow of a doubt, exactly how Erin would perform on the morning of 9/11.

As Dr Wood's own data shows [fig.7, in part 2 above], and as the NOAA data displayed in this java plot reveals , at around 2 am on the morning of 09/11/01 Erin's  assured fate was confirmed as, after coming to an almost complete stop in the cooler waters of the NE, and after also being slowed/ affected by  previous, successive cold fronts,  it was forced/bounced/deflected away from NYC in a new NNE direction [a 45 degree change in direction ], by a much larger, still steadily advancing, much colder, much dryer naturally-occurring, high pressure air system, which had over the 6 previous days, made its way across almost the entire continental US from West to East.


"You stated that, “To date, it seems she [Wood] has completely ignored it, [the cold front] out of ignorance of the natural phenomena itself, or with deliberate intent.”

“At the same time, there was a cold front moving from the Midwest towards New York City that would have slowed the hurricane and turned it northward, but how sure could meteorologists have been about the timing of the turn? How sure could they have been that the storm wouldn’t pose a serious threat to “Cape Cod? If Erin had stalled a little bit longer where it was, storm surges would have flooded JFK and LaGuardia airports as well as Cape Cod. Not only is New York City near sea level, but so is most of Long Island. Evacuation from these areas would be a mammoth undertaking and could not be organized at a moment’s notice – and yet the public remained uninformed.” ".

So Prof. Wood has now devoted one whole paragraph to the consideration of this cold front in her book :-) . Whoop de do!

But still, no serious examination/consideration of the phenomena as a possible explanation for Erin's movements has ever been entertained by Wood, either in her book, nor in the 10 web pages devoted to Erin at her website [I just checked today] - and, as I understand it,[I have not read the book], certainly no graphics in the book illustrating the progression of this truly massive front from West to East, as I have laid out above.

Obviously, this mention of the cold front in the book is merely an afterthought on her part, possibly induced by my original 2008 article, nothing more. She has never to date considered the front as a possible explanation before she reached her "scientific conclusions" regarding Erin's movement on 9/11, nor seriously explored the possibility. Some scientist!

Posted by Onebornfree at 8:43 AM