In Retrospect, I Was Far Too Kind to Professor Wood


On re-reviewing my original 2008 article,  it is abundantly clear to me that at the time I had been far too kind to Professor Wood.

Forgetting, for the moment, the "crimes" previously exposed in parts 2 and 3 of this current report, these days it sticks out  to me "like a sore thumb" that she has, at the same time, shown a complete disregard for basic, run-of-the-mill,  "par for the course" scientific methodology with regard to the requirement for the verification of the authenticity of any/all photographic "evidence" used to support her D.E.W. / Erin hypothesis to date.

No Concerted Photographic or Video Authentication Procedure Was Ever Attempted by Prof. Wood -[Nor by any other 9/11 researcher with "scientific" credentials.]


As well as the misrepresentations  and blatant omissions that I have drawn attention to in parts 2 and 3 of this report, and no differently from the other  "scientific" 9/11 researchers with an apparent formal scientific education and resulting credentials [e.g. Steven Jones  and Richard Hall ] , Prof. Wood has never made any serious, concerted effort  to  verify the authenticity of any of the videos or photos she has used as evidentiary proofs for her hypothesis, either on her website , or in her latest book .


The only step she apparently took was some sort of name-check verification procedure she reportedly took with regard  to certain alleged authors of  photographs she uses as "evidence" to support her hypothesis in her book .


But no sign anywhere of any doubt on her part that any/all of the video and photographic "key evidence" she has used to date to formulate her D.E.W.  [or whatever] hypothesis might be anything other than genuine.

The question of the authenticity of any photographs or videos she has used to "prove" her hypothesis is, as far as I can see, and very conveniently, never seriously raised, making Ms Wood either a very bad "scientist" or a charlatan - as with Prof. S. Jones and R. Hall, I'm not sure which - nor do I really care which it in fact  is.

"Cloud-Cuckoo Land"? You? Anybody?
And if you are a non scientist yourself who happens to agree with Prof. Woods "research" "findings" to date, or  with those of esteemed "scientist" Steven Jones, or  perhaps esteemed "scientist"  Richard Hall, for example, and you think that its perfectly "O.K."  for these persons to  entirely ignore standard scientific methodology [in this case involving the verification of any/all imagery used as a "proof", in order to formulate some sort of alleged hypothesis of theirs], then you, my friend, are simply living in "Cloud-Cuckoo Land"! [Just like the "scientists" themselves.]


Two More Small Examples of The Use of Non-Authenticated Imagery by Dr. Wood [To add to the image displayed  at the top of part 1 of this report]:


At her website Prof. Wood has the following section [co-authored by her "aider and abettor" Dr. Morgan Reynolds - another guy with credentials that are somehow supposed to make him  more knowledgeable/trustworthy]: Why Indeed Did the WTC Buildings Disintegrate?,  which displays these two famous 9/11  tower collapse photographs and supporting text as shown, as definitive "proof" positive that Prof. Steven Jones is incorrect in his conclusion that the demolition of the WTC complex was achieved via thermite or via thermate  [I forget which:-)], and that "therefor" Direct Energy Weapons [D.E.W.] "must" have been used instead : 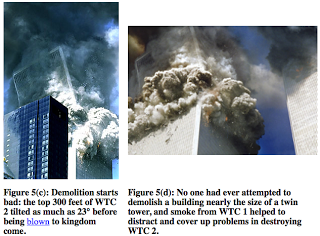 However, neither Wood or Reynolds  have ever  seriously tried to definitively verify the actual authenticity of either of these two photographs [nor of any others they use, nor of any of the videos depicting tower collapses etc.]


The Ultimate Irony
Ironically enough, [but also very predictably], Prof. Jones himself has never questioned the authenticity of those two photos either, nor of any other similar photos, nor of any of the collapse videos he uses to justify his own equally unprovable hypothesis of tower demolition methodology [i.e. thermite/thermate or whatever].


My Point [Dear Reader] Is : It Does Not Even Matter If You Believe These Two Photos Are Real, or Fake!

Full disclosure: For numerous reasons, I believe they are both provable fakes [i.e. 100% digitally created computer fabrications], but I am not going to try to demonstrate, or "prove" that  to you here within this report. Whether they are fake or not is besides the point; my point here in this report  is simply that regardless of whether you or I currently think that these photos are real or fake, it is in no way a part of the genuine, truth-seeking scientists methodology to automatically assume that they are in fact genuine, and to then use them as "evidence" to bolster one's position, which is exactly what Prof. Wood and Dr. Reynolds have done here [and do repeatedly, elsewhere with regard to all other 9/11 photos and videos].

Furthermore, and as I have previously tried to make clear/draw attention to, this is just one tiny example of  exactly the same behaviour consistently exhibited by every single one of the other [previously named]"scientists" involved in  "serious" 9/11 "research", with regard to absolutely every single video/and or photograph that they have used to date as "proof" of their own particular hypothesis, time after time, day after day, over and over and over again,  for  years!

None of the [listed] name scientists involved in "serious" 9/11 research are utilizing anything close to standard, "run of the mill" "boiler-plate" scientific methodology with regards to imagery verification for any of the imagery they have to date used to support their own theory of what happened on 9/11.

Which most likely makes all of their purported proven theories to date pure HOGWASH!

In fact, very few people have ever bothered with a standard scientific methodology of evidence verification regarding any/all 9/11 images, one I know of is actually a non-scientist [or at least non formally trained]; a Mr Simon Shack, whose short film series "September Clues" examines the imagery issue in detail, and whose website septemberclues.info, goes into far more detailed analysis [than does his movie] of both  the official mainstream media 9/11archives, and of the thousands of amateur and professional videos and still photographs  purporting to be genuine photographic accounts of events that day.

[Another researcher that I am aware of who has also bothered to very closely analyze at least some of the original 9/11 media footage plus the 100's of post 9/11 additions to that imagery pool both "amateur" and "professional"[unlike Wood, Hall or Jones] and who, interestingly enough, appears to have an actual scientific [or at least engineering], background, is "Stilldiggin", but he/she appears to have gotten out of the research spotlight since  around 2007 or so.]

There may be others who have also been honest enough to go back and closely review all of the original imagery before trying to advance any theory of what did or did not happen on 9/11that I have not mentioned- my apologies if you are reading this and feel left out.

In 2008 I wrote :"However, disregarding her conclusions about Erin, to this day I remain very open to the idea that direct energy weapons [D.E.W.] may well have brought down the 2 towers. Based on my limited knowledge, and given all of the many strange anomalies, her proposal _still_ makes the most sense to date."

To clarify, [for what it's worth], I no longer believe that Prof. Wood's Direct Energy Weapon [D.E.W.] theory "makes the most sense", simply because her hypothesis is based almost 100% on the analysis of what is, as Simon Shack has relentlessly demonstrated, in the final analysis, fake, pre-fabricated , 100% computer generated  imagery of the twin towers collapsing, plus photographic "stills" taken either from the exact same faked footage, or by an alleged government [i.e. F.E.M.A.] or "amateur" photographer.

Because All of The Collapse Imagery Was Faked, We Don't/ Cannot Know For Certain What Was Used To Demolish The WTC Complex [and trying to establish what did or did not is an irrelevant distraction in any case.]

Therefor, it is impossible to know exactly what was used to demolish the towers and the rest of the WTC complex -all we can know for certain is that they were there on 9/10, but by close of day on 9/11 all buildings had apparently been flattened. Obviously they were demolished deliberately; just as obviously fires from planes, or even missiles [if either actually hit the towers in real life], are/were incapable of bringing 500,000 ton 1300 ft tall buildings made of steel and concrete down- we just cannot be sure exactly how.[ For myself , standard, bottom-up demolition off camera, possibly behind standard military smoke screens makes the most logical sense at the present time, although I have no proof of that actually being the case.]

Besides, It's  All Incidental- My Main "Thrust" In This Report Is :
1] a refutation [in parts 2 and 3 of this report], via her own published data, [a part of which which she has apparently deliberately altered at some point in time between late 2008 and April 2013 in order to try to bolster her hypothesis], of her specific proposal of the direct involvement of Hurricane Erin in the events of 9/11;  a tactic which besides displaying intellectual dishonesty on her part in order to "prove" her unsubstantiated claim,  also exhibits a complete ignorance of both hurricanes, and of the related weather systems that are fully capable of naturally deflecting them away from a coastline they would otherwise endanger; meteorological knowledge which, furthermore, is just standard everyday knowledge for any halfway intelligent person who has lived for any length of time on a hurricane-prone coastline, such as the S.E. coast of the U.S.

2] Far more importantly: Prof. Wood's and others almost complete lack of adherence to standard scientific methodology/protocol regarding video/photographic authentication procedures which were [and are to this day] then used as "proof" of whatever takes their fancy. [Addressed in part 4 of this report]

If you have read, and agree with my assessment of  the science [ or lack thereof] of Prof. Judy Wood, as outlined  here, then [maybe] you have to consider making a decision regarding hers [and the other named "scientists" who have consistently acted in the exact same way as Prof. Wood, at least with regard to their similar, complete lack of sustained imagery verification procedures ], real motivations in all of this: is she [and those other named "scientists"], merely a terrible scientist who is unfamiliar with the basic scientific methodology and the absolute necessity and importance of closely adhering to it, if any subsequently developed hypothesis is to be of any credibility whatsoever, or, on the other hand, is something more nefarious going down here; is she another 9/11 charlatan; that is, a person whose paid job is to deliberately obfuscate and lead people away from the truth about what really did and did not happen on September 11th. 2001 ?

It's your mind, therefor its your call. Choose wisely, my friend.

Posted by Onebornfree at 8:42 AM