Professor Judy Woods is a scientist somewhat famous  in 9/11 research circles for her claims that some type of Direct Energy Weapon [D.E.W] was responsible for the deliberate destruction of both of the WTC1 and WTC 2 towers and for the destruction of  other buildings within the 9 building World Trade Center.

As such, she maintains her own website to publicize her research/claims, and has also recently published her book "Where Did The Towers Go".

One interesting facet her research has uncovered is the mostly uncontested fact that on the morning of 9/11 a very large hurricane named "Erin" was bearing down on New York City, only to seemingly inexplicably  turn sharply away to the right, further out to sea that morning.

From what I understand, Professor Woods has theorized that Hurricane Erin was in fact used as some type of energy source to power the D.E.W. weapon that she theorizes was used to destroy the WTC buildings. She  claims that the sharp turn that Erin made on the morning of 9/11 is proof of its direct involvement in the destructive event of 9/11.

A Personal Admission - It's a Great Idea!

If truth be told, I would have to admit that the idea of a large Hurricane having a direct involvement in the events of 9/11 had a lot of attraction for me personally- I often like unusual, counterintuitive ideas.

So initially, Prof. Wood's claim was very attractive to me- it was, at the very least, an original idea that deserved consideration , I thought.

I initially considered Dr Wood's claim that Hurricane Erin was directly involved in the events of 9/11 from the viewpoint of a 20 + year inhabitant of the S.E. coast of the U.S.[ i.e myself].

Hurricanes pass close by almost annually and so one naturally becomes hyper-aware of both the storms themselves, and of the types of natural conditions that are needed to prevent them from endangering my approximate area.

So in considering Dr Wood's claims, I was very interested to see if she had considered/allowed for the one natural event which both myself and any other experienced hurricane watcher knows will stop a hurricane dead in its tracks every time, and that would cause  significant changes in direction.  [She did not, and has not, to date- this is what I call attention to in part 3 of this article].

Regarding Erin's alleged position and movements on 9/11 according to Prof. Wood, I came across 2 archived radio interviews at Prof. Wood's site [both with Andrew Johnson on Jim Fetzer's "Dynamic duo" show.]

In These Radio Interviews, Dr. Wood Claims That  Erin Was Closest at Around 8am EDT on 9/11

In the first of those 2 interviews Dr Woods said that Erin was :


"....closest to NYC on the morning of 911, around 8am. And then it just stopped, it didn't keep going East, or West, it just stopped and then it turned around and started heading back out"

Dr Wood made other, related comments/claims regarding Erin's position and behavior , including claims that Erin's behavior on 911, as revealed by her own graph [ fig 7 here ] exhibited classic signs of it being an artificially controlled environment.

Those radio interviews [ with Mr Andrew Johnson] can be heard here:

Dr Wood's statement that Erin was "....closest to NYC on the morning of 911, around 8am. And then it just stopped, it didn't keep going East, or West, it just stopped and then it turned around and started heading back out", contains two distinct claims:

Wood Claim [2]: "around 8am..... it just stopped, it didn't keep going East, or West, it just stopped and then it turned around and started heading back out".

N.B. The Purpose of Part Two of This Report Is To Directly Refute Those Two Claims.

FACT: Dr Wood's Own Site-Published N.O.A.A. Data Refutes Her  Claim That Erin's Eye Was Closest To NYC at around 8am on 9/11 :

Here below is a graph plot of Erin's track , taken from : http://www.drjudywood.com/articles/erin/erin10.html 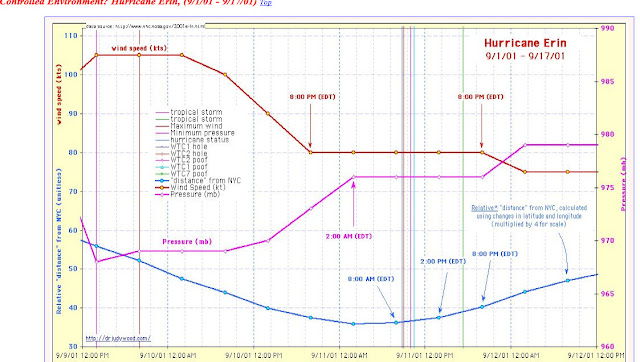 Fig.1 :  screen-shot of graphic plot from J. Wood's site, of Erin's path made from official N.O.A.A. data,  [N.B. This image was originally screen-grabbed from J. Wood's website in 2008.]

The bottom , blue line in  Fig. 1  above indicates the distance for Erin's eye from NYC, based on NOAA data. The lighter blue points along that line indicate times for those distance readings given in Eastern Daylight Time[ EDT] , taken every 6 hours.


Here is a close up of the relevant part of the bottom, blue line that represents position of Erin's eye relative to NYC on 9/11: 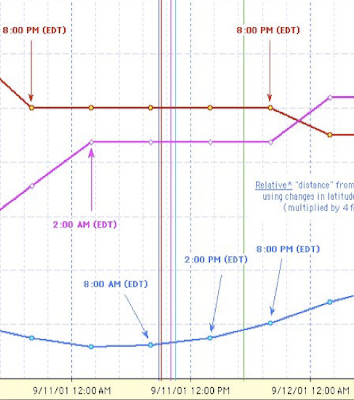 Fig.2 :Detail of fig. 1 [Click on illustration to enlarge]
[N.B. This image was originally screen-grabbed from J. Wood's website in 2008.]

Also notice the 2 upward steps in the blue line [look closely now!] between the unlabeled [i.e2am] light blue plot point and the 8am EDT plot point directly to its right:

Notice also how the 8am plot point itself is slightly higher than the [unlabeled] 2am plot point to its left, [indicating that Erin's eye was closer to NYC at 2am than at 8am], and how this blue plot line continues at an increasing upward angle as it moves to the right of the graph and as Erin's eye continued to move further away from NYC.

Obviously, the unlabelled 2am EDT  light blue data point on that blue line depicting Erin's eye's path is in actual fact the official closest point to NYC for Erin, as per N.O.A.A. data,  and not the 8 am EDT point claimed by Prof. Wood.

For clarification here is the latest [March 2013] screen grab of the same image in question from the same page and illustration : 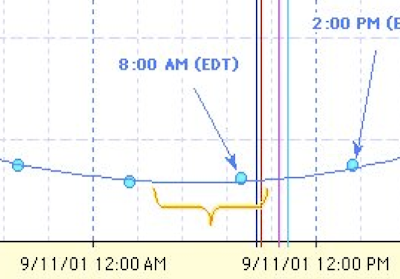 Notice how now, the original [circa 2008] in Fig. 6[a], above left, shows 2 upward steps depicting a movement away from NYC  for Erin that commenced around 2am EDT, while in the new [2013?] screen-shot, Fig. 6[b], those 2 upward steps in the blue line are no longer present, but have been replaced by a single downward step shortly after the unlabeled 2 am data point.  :-)

However, even in this 2013 version of the  same graph, the exact same, unlabelled 2am EDT blue plot point [directly to the left of the 8am EDT blue plot point] as is present in the 2008 graphic [Fig.3] still appears to be closer to the bottom of the page than the labelled 8 am EDT plot point , meaning that Erin's eye was still, as per Dr. Wood's displayed NOAA data, closest to NYC at around 2 am EDT, [and not 8am as she claims].

"A Minor Point- An Insignificant Difference", You Say?

If you believe that what I show above is an insignificant [ a couple of millimeters ?] difference between the height above the baseline of 2am plot point versus the 8am one, all I can tell you is that it is inevitable that it looks this way, given the format within which the data is presented.

Regardless, my Fig. 6[b] shows a clear difference in height above the graph baseline.

Next Up, A Refutation of Wood Claim [2]:

[Reminder of Wood claim [2]:"around 8am..... it just stopped, it didn't keep going East, or West, it just stopped and then it turned around and started heading back out".]

In order to check Dr. Wood's claim [2], the best view for actual position would be shown in a pictorial that plots NOAA data for actual times and positions looking down on Erin's path, as if from a satellite, or high-flying aircraft directly above it.

I found that the best, clearest  plot of Erin's actual path,  based on the official NOAA data,  is here.

Breaking! :The Animated Java Plot/ Screen Shot Below From That Site [linked above] Shows That Erin Actually Started It's Move Away From NYC  at Around 2am On 09/11/01, Not At 8am, As Wood Claims ! 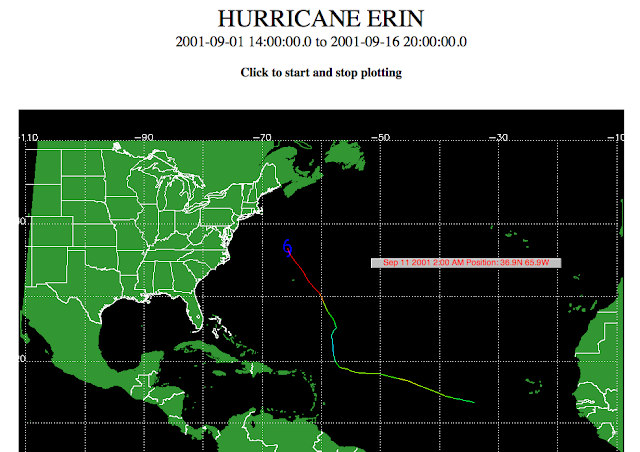 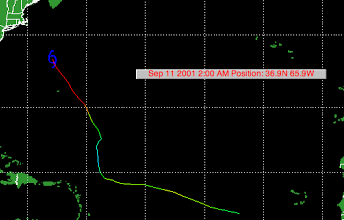 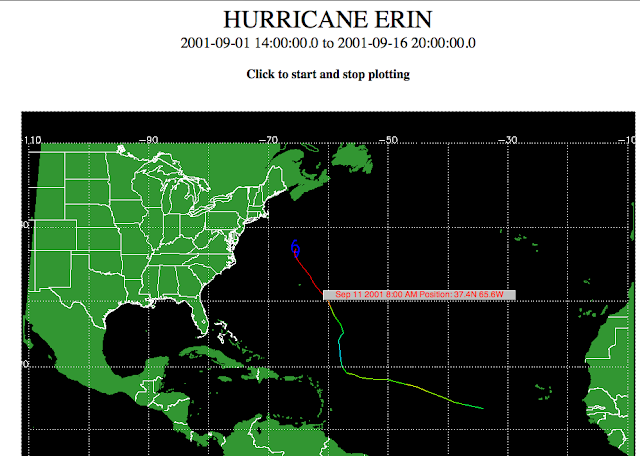 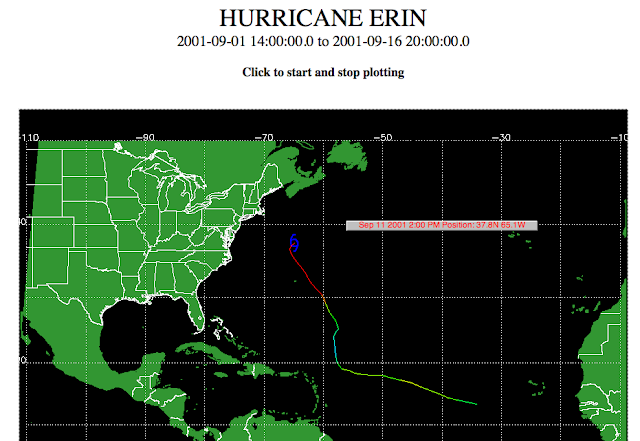 
"Well O.K." you  might say, "Professor Wood was off on her claim about Erin's position by 6 hours according to the official data, but that does not mean that she is wrong about it being an artificially controlled environment".
Well first of all, I would advise you to be extremely wary of the claims of someone [anyone, even a "Professor", with "credentials" no less!], who has already been shown to have blatantly misrepresented the official  data regarding this hurricanes position on 9/11, in order for it to bolster/fit their grand 9/11 theory. [Not that I'm a big fan of "official" data, however, in this case its all we have to go on].

But if that's not enough "evidence" for you, or sufficient grounds for suspicion of her claim that Erin was an "artificially controlled environment", then part three of this analysis may be of interest to you, as it shows how, in order to formulate her grand "hypothesis",  this particular "Dr.", or "Professor" with society's formal "credentials"has also entirely ignored consideration of  the on-record 9/11 presence of a far larger [than Hurricane Erin]  natural phenomena in the continental US; a natural phenomena which, furthermore, has a proven historical record for deflecting hurricanes away from the US coast line.

Posted by Onebornfree at 8:44 AM