[Or, the almost complete lack of adherence to regular scientific methodology displayed by Dr. Judy Wood and all  other accredited "scientists"  currently involved in "serious" 9/11 research.] 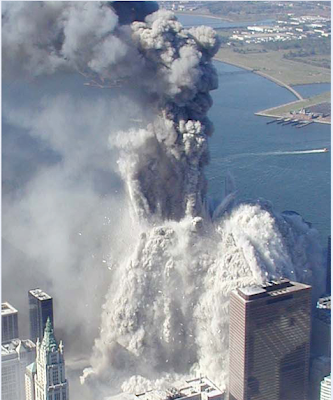 [The above photo, used on the cover of Prof. Judy Wood's book "Where Did The Towers Go",  is a proven fraud, a pure, fabricated, 100% digital creation, not  in any way a genuine photograph of a 9/11 event. For 2 more examples of fraudulent photos being used as  "genuine" "evidence" by Dr. Wood and others, in order to "prove" their own 9/11 hypothesis,  see Part 4 of this report].

N.B. This 4 part report is a re-post/ re-edit of a badly written and badly presented article I originally posted here in 2008, that examined Professor Judy Wood's hypothesis that Hurricane Erin had some sort of direct involvement  in the events of 9/11.

This article is not intended as a character assassination of either Prof. Wood or her associates, but rather as an expose of the almost complete lack of utilization of a consistent, everyday, "run of the mill" scientific methodology for any of her "research" to date concerning the events of 9/11.

However, for the discerning reader, this to be demonstrated, consistent, almost total lack of utilization of the scientific methodology by Prof. Wood might, by itself act as a "character assassination" of both her and her various "professional" associates, as it points directly to an complete lack of professionalism on her/their part. But this is unavoidable, in my estimation. Sorry, but that's just "the way the cookie crumbles" in the real world.

Because they are supposed to know better, that's why! [which makes it fun to do!].

If I raised the same criticisms about a non formally trained 9/11 researcher, they have an easy "out" : they simply don't know any better.

On the other hand, all scientists are "supposed" to be trained in a very exact methodology which must be adhered to at all times if their "scientific" conclusions are to be at all  credible to you and I,  in the final analysis.

Therefor, if it can be easily demonstrated that Prof. Wood, [or any other "trained scientist"] has steadfastly refused to comply with some of the simple but exacting rules of their very own profession, then it stands to reason that their 9/11 hypothesis is most likely pure "bunk".

I am by no means singling out Prof. Wood here.[Full disclosure: I used to be a "fan" of her work].

I have previously tried to draw attention to  the exact same lack of application of the scientific methodology to the hypothesis of Richard Hall, another individual involved in 9/11 research who supposedly has a formal, scientific, educational background, but who consistently demonstrates that he has entirely forgotten most of it- assuming he was ever actually taught the fundamental principles of his "trade" in the first place!

My overall goal is to draw attention to the fact that any/all of the accredited 9/11 researchers with some sort of "official" designation that denotes them as being formally trained in the the scientific methodology are either deliberately , or out of sheer ignorance, entirely ignoring their own training in order to reach their conclusions [or hypothesis, if you prefer] about exactly what happened on 9/11.

Let me name names, to get this issue of the almost complete lack of employment of a consistent scientific  methodology in their published conclusions about 9/11 out in the open.

[1] Prof. Judy Wood [+ all associates/promoters of her hypothesis],

[2] Richard Hall [ + all associates/promoters of his hypothesis],

[3] Prof. Steven Jones,  [ +all associates/promoters of his hypothesis].

My Claim: Every one of these three, formally [i.e. University] trained, "scientists" involved in 9/11 "research" is studiously avoiding the application of the scientific methodology in at least one crucial area  of their own research.

I Said: "At Least One Crucial Area"?, But For Prof. Judy Woods, It Is Not One "Crime" Against Science, But Three!

In the case of Prof. Wood, to be expanded on in this article, [and just as with Richard Hall], I demonstrate that Prof. Wood has not only , like her "scientific" associates, consistently ignored  the required scientific methodology in the exact same way as those associates in that one crucial area  [briefly explored in part 4 of this report], she has also apparently deliberately "misinterpreted" official data in order to push her own agenda, even subsequently altering a particular graph plot at her own site in order to try and hide what the original graph/data showed, and she has, all to conveniently, also entirely ignored  one entire crucial area of meteorological research in order to conveniently reach her conclusion that a hurricane [Erin] was directly involved in the events of 9/11.

This article is in four separate parts

Dr. Wood's deliberate [or extremely sloppy- take your pick], entirely unscientific, total misrepresentations  of official data on Hurricane Erin's actual position and movements relative to New York City [NYC] on 9/11, in order  to support her  hypothesis [i.e. that Erin was an artificially controlled event whose energy was in some way being utilized to facilitate the demolition of the WTC complex via something called "Direct Energy Weapon {you know, "D.E.W."}, technology".]

Dr. Wood's complete [and very convenient] entirely unscientific ignoring of a far larger [than Hurricane Erin] natural phenomena that was present on 9/11 that has a proven, historical, meteorological record for deflecting hurricanes away from the U.S coastline.

Dr. Woods [and Dr. Morgan Reynolds, and others] total non -compliance with standard scientific protocol that alway requires the verification of the authenticity of any all "evidence" to be used to formulate a theory of what happened on 9/11.

In this case, Wood and Reynolds have consistently [to this day, and just like other 9/11 research"scientists"Richard Hall, and Steven Jones, previously mentioned],  completely ignored the standard scientific procedural requirement  to fully verify the authenticity of any and all video and/or still photographic imagery  that they have studied/used to reach their so-called "scientific" conclusions to date.

Posted by Onebornfree at 8:44 AM